Anthony Dreyer is a commercial litigator concentrating on intellectual property and sports litigation. Mr. Dreyer litigates matters involving trademark, copyright, rights of publicity, false advertising and consumer fraud claims. His recent matters include representing the NFL and its 32 member clubs in a copyright infringement suit involving the use of game-action photographs. He recently represented the NBA, NFL, NHL and MLB as amici in a Ninth Circuit appeal involving the unauthorized Internet transmission of television broadcasts.

He is representing the NCAA, NBA, NHL, NFL and MLB in a lawsuit brought against New Jersey Gov. Chris Christie to prevent New Jersey’s authorization and licensing of gambling on athletic events, and secured permanent injunctive relief on behalf of his clients. He represents the NBA in connection with its imposition of discipline against former owner Donald Sterling and is defending the NBA against claims brought by Mr. Sterling.

He successfully represented golfer Rory McIlroy in a lawsuit brought against him by Oakley, a former sponsor, over an endorsement agreement Mr. McIlroy entered into with Nike. Mr. Dreyer also is representing the PGA TOUR in two separate lawsuits: one brought by golfer Vijay Singh relating to discipline imposed against Mr. Singh under the TOUR’s anti-doping program, the other brought by a putative class of TOUR caddies challenging the alleged use of the caddies’ name and likeness.

In addition to the Sterling matter, Mr. Dreyer has litigated numerous disputes on behalf of the NBA and its member teams. He represented the NBA in litigation relating to the league’s lockout of its players following expiration of the NBA’s collective bargaining agreement with its players.

He has litigated player discipline and salary disputes on behalf of the NBA, the NHL and teams in both leagues. He has counseled both the NBA and the NHL in connection with disability insurance coverage matters. Mr. Dreyer also has advised the United States Tennis Association in connection with the US Open and US Open Series tennis tournaments. 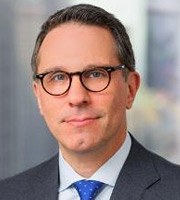