In her current role, she manages the Red Bulls’ internal legal function, oversees all outside counsel relationships and serves as a key legal advisor to the club’s executive team. While at the Red Bulls, she has negotiated multi-year extensions of the club’s regional TV deal with MSG Networks as well as a deal with TuneIn to make the Red Bulls the first club in MLS to have a 24/7 online radio channel. She has also advised the club in securing its biggest sponsorship deal in club history with Yanmar, and negotiated deals to bring several top international football clubs to Red Bull Arena, including Arsenal FC, Chelsea FC, Bayern Munich and Club America. Prior to serving in her current role, she was a Legal Counsel at Red Bull North America, Inc., the U.S. affiliate of the Austrian headquartered energy drink giant.

Prior to joining Red Bull, Djenaba worked at two large international law firms, where she represented issuers and corporate and institutional lenders in domestic and cross-border financings transactions, including senior secured credit facilities and securitizations. She represented Nissan in connection with the first securitization under the Federal Reserve Bank of New York’s Term Asset-Backed Securities Loan Facility (TALF).

Outside of work, Djenaba has volunteered for the Alliance for Children’s Rights, Election Protection and the Los Angeles County Bar Association’s Barrister’s Domestic Violence Project. She also sat on the Leadership Council board of the Fulfillment Fund, whose mission is to “help disadvantaged students […] achieve success in life through access to higher education.” 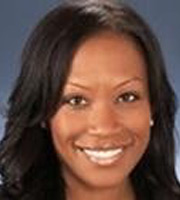