ISDE is highlighted for the fourth consecutive year in the international list of law schools compiled by the prestigious British business daily newspaper, Financial Times, once again being the Spanish Law School with the highest number of referenced programs in a special report entitled Innovative Law Schools 2014. 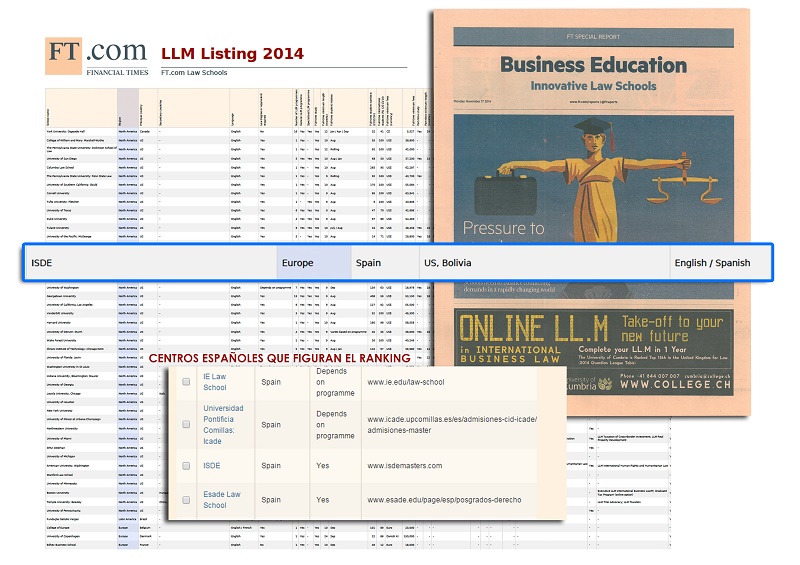 The list includes the 98 most outstanding training centers and innovative in world law, only 25 institutions from non-English speaking countries. In the list of FT, 43 European centers have accomplished being present this year, and only 4 are Spanish. Among the Spanish law schools, ISDE is the only not belonging to a university that manages to be at this prestigious ranking.
In addition, ISDE is the Spanish center, the third in Europe and fourth in the world rankings with more referenced programs, by Financial Times, a total of 18.
In the list of academic institutions, with which ISDE has agreements, such as Columbia University and University of Florida, and the British University of Cambridge are also present.
Juan José Sánchez-Puig, executive director of ISDE, believes this new international success is the recognition of good work being carried out for years in the Spanish law schools: “The inclusion of ISDE in international rankings, such as the Financial Times, speaks clearly about the prestige achieved by our institution outside Spain. It is the result of a vocation that has always sought to transcend our borders and that has led us to collaborate not only with international law firms, but also with some of the world’s major universities like Columbia or Cambridge.”
ISDE is a skilled law school; training is done in facilities in Madrid, Barcelona and New York’s iconic Empire State Building. In this city it has established agreements for academic collaboration with internationally renowned institutions such as Columbia University and St. John’s University. In addition, the British University of Cambridge and the American University of Florida. The school also has international offices in Mexico and Bolivia.
ISDE is the first Spanish Law School in achieving recognition of the Bar of Madrid and Barcelona. Currently it has the approval of the General Council of Spanish Lawyers (CGAE) and the Council of Bar Associations of Catalonia (CIPAC).
Volver al listado