Neal H. Pilson is the President of Pilson Communications, Inc. (PCI), and the former president of CBS Sports. Established in 1995, PCI is a consulting company active in all areas of sports television, media and marketing, and provides representation, negotiation and consulting services for U.S. and international companies and organizations. PCI’s clients have included NASCAR, the International Olympic Committee, the Rose Bowl, and Churchill Downs, among others.

In two terms as President of CBS Sports, Pilson was responsible for negotiating broadcast agreements for all of CBS’s major sports franchises including the NFL, the NCAA Basketball Tournament, The Masters, college football and basketball, and he handled the acquisition of domestic television rights for the Olympic Winter Games. During his tenure, the CBS production unit won major Emmy Awards for coverage of the Final Four, NFL Football, Major League Baseball, the Daytona 500 and other events, as well as a George Foster Peabody Award for The Masters. In December 1994, the International Olympic Committee awarded Pilson the Olympic Order, the highest honor given by that organization. Before joining CBS, Pilson was in private law practice in New York and served as an executive at both Metromedia, Inc. and the William Morris Agency, Inc.

A frequent speaker, panelist and moderator at sports conferences, Pilson led the 2007 Paley Center Dialogue on Sports and the Media. He is a frequent on-air contributor and is often interviewed by broadcast networs, sports radio stations, ESPN and CNN, and is often quoted in The New York Times, The Wall Street Journal, and Sports Illustrated, among other outlets.

Pilson received an A.B. in history from Hamilton College in 1960 and an LL.B. from Yale Law School in 1963. 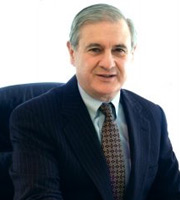