Adam Raiken is the Vice President, Finance for the New Meadowlands Stadium Company, LLC, operating company of MetLife Stadium in East Rutherford, NJ. MetLife Stadium is home of the New York Giants and New York Jets and is the only stadium in the NFL home to two teams.

As the head of the Stadium’s finance department, Raiken is responsible for oversight and control of the financial processes for the Joint Venture. This includes working with senior management of the Stadium Company and the New York Jets and New York Giants to analyze the financial implications of all potential business opportunities.
Adam joined the New Meadowlands Stadium Company in October 2012 after spending six years with the New York Yankees, his most recent role being Director of Financial Operations.

Prior to the New York Yankees, Raiken spent four and a half years at PricewaterhouseCoopers, where he focused on auditing the NBA salary cap, MLB revenue sharing, the NFL salary cap. In addition to his work in the sports industry, while at PricewaterhouseCoopers Raiken also audited AT&T and Pearson Education.
Raiken received a B.S. in Applied Economics and Management from Cornell University and is a Certified Public Accountant. 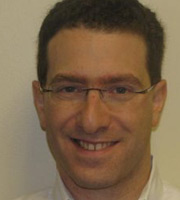