ISDE is committed to the training of our young, through the realm and the domain of rhetoric 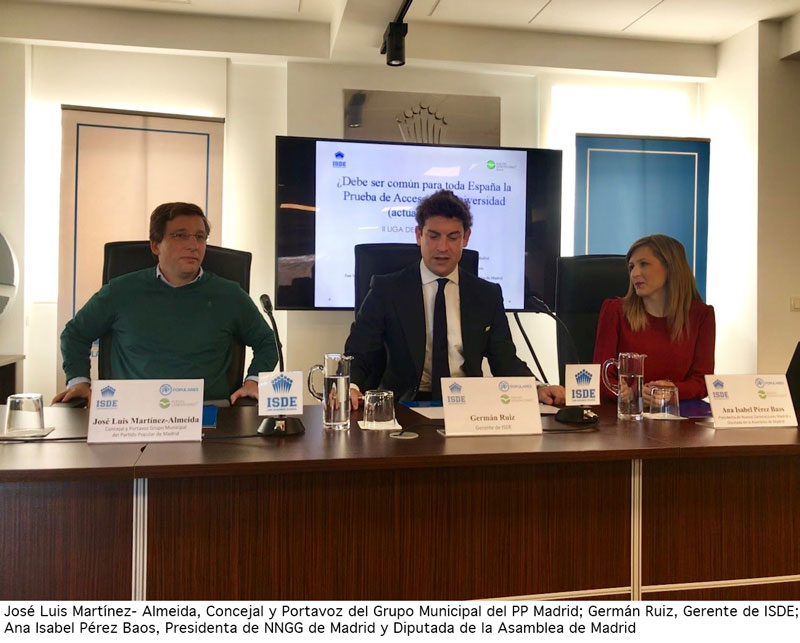 The headquarters of ISDE in Madrid hosted in April the second debate league t of the New Generations of the Popular Party of Madrid.

The spokesman for the Popular Party group of Madrid, José Luis Martínez-Almeida; Germán Ruiz, Manager of ISDE; Ana Isabel Pérez Baos, President of the New Generations of the Popular Party of Madrid and MP in the regional assembly.

The spokesman for the Popular Party group, José Luis Martínez-Almeida, was in charge of inaugurating this debate league, together with Germán Ruiz, Manager of ISDE.

Twelve teams, accompanied by an adjudication group, competed in a day marked by democratic and educational values, respecting at all times the ideas of those who had to argue “In favor” and “Against” on the debate question: “Does the University Access Test have to be common for whole of Spain (EBAU)?”

Germán Ruiz and Martínez-Almeida highlighted during their speech at the opening remarks the importance of youth education within the political parties and how the debate, the exchange of ideas and arguments are the basis of a quality democracy.

In its commitment to innovation in the educational field in our country, ISDE welcomed this initiative, which in turn is a nod to rhetoric and oratory, so important in the field of law.