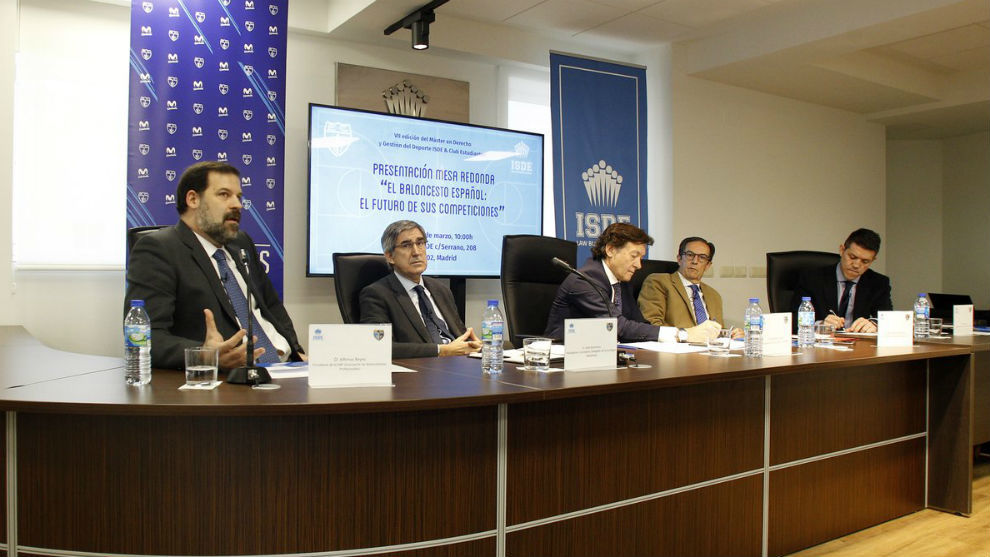 “Basketball Windows are a key issue”, “Spanish Basketball experiences best moment ever”, “Endesa Liga is a high-quality-product” o “Basketball represents 2,4 per cent Spanish GDP”. These are the main findings addressed today at panel discussion ‘The Spanish Basketball: The Future of the Competitions”, held to present Master in Sports Law and Management ISDE & Club Estudiantes VII Edition.

Miguel Ángel Bufalá introduced the event expressing his gratitude to the organization and all the attendees; and point out that the Sport Law and Management ISDE&Estudiantes VII Edition Master is a complete success.

Regarding to basketball Windows, Alfonso Reyes emphasized that “we don´t like it. Windows create distortion for basketball”. Reyes explained that Endesa Liga is the “professional league with less national players” and added that “there is insecurity normative what causes that we don´t know is going to happen next year”.

José Ramón Lette thanked ISDE executives Jorge Pintó and Juanjo Sánchez Puig for lead the event, as to all the attendees. Lette explained that sport is more than competition: “Sport generates 200,000 employments, grows six per cent and ten millions of tourists from eighty millions visit Spain every year due to sportive reasons”. Lette also added that “Spanish basketball experiences an age than never before”.

Jordi Bertomeu, by his side, pointed out that “league is a far cry from Spain. Spain is very good”. Bertomeu said about windows and the Euroligue that we “look for quality, not territoriality. We don´t stand for territories, we stand for cities and clubs”.

Juan Francisco García also criticized the current calendar and noted that “sports days in basketball are over the top nowadays”. “Endesa Liga experiences is in its finest moment”.

The event closed with Jorge Pinto words, ISDE president; who expressed thanks to all the attendees and to the mass media; and confirmed that “there is a conflict, but positive and moving forward to find a solution”. Other personalities as Former Basketball Team Coach Pepu Hernández, World Champion 2006 and Europe Sub Champion 2007 came to the event.