Lawyer at Baker & McKenzie in Madrid (Spain), specialized in labor/employment law as well as sports law, admitted to practice in Spain and New York (USA). Professor of several courses on a part-time basis at Universidad Pontificia Comillas and Centro de Estudios Garrigues and also a guest speaker at New York University (Madrid campus).

Prior to joining Baker & McKenzie, he played soccer at professional level for several European clubs, including Atletico Madrid, Wacker Burghausen and Brighton & Hove Albion. Linked to the soccer world as he worked for Charlton Athletic as scout for the Spanish market and he is a guest commentator on Real Madrid TV’s international channel. 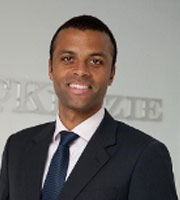