Hernán Pantaleón is the founder of Hernan Pantaleon Abogados and teaches in the University of Miami School of Law’s Entertainment, Arts and Sports Law LL.M. Program. Prior to opening the firm in 2013, he worked at Marval, O’Farrell & Mairal from 2011-2012, Baker & McKenzie from 1995-2010 and Grant, Hermann, Schwartz & Klinger as a foreign associate from 1993-1995.

He has authored numerous publications and spoken at various seminars all over South America on topics including, “Banking and Finance Market Trends in Latin America,” “Export Finance and Securitization Structures,” “Financing Major Projects,” “Debt Restructuring,” Cross-border Lending,” and “Banking and Finance.”

Pantaleón graduated with his J.D. from the School of Law of the Argentine Catholic University and subsequently earned his Diploma in Comparative Law from Georgetown University, as a Fulbright Scholar. He then made his way to the University of Miami to obtain his LL.M. in International Comparative Law. 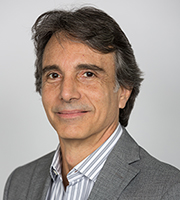